The garden for 2018 marks a considerably larger undertaking than gardens in the past. We have added an addition 21′ x 12′ bed and we are going for the gold on growing vegetables this year. 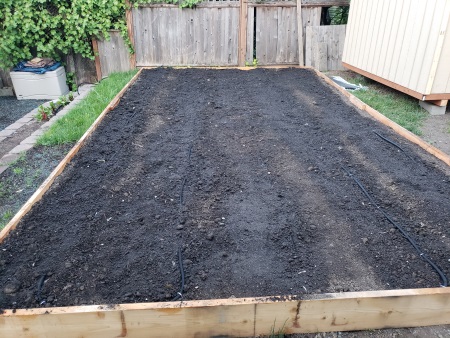 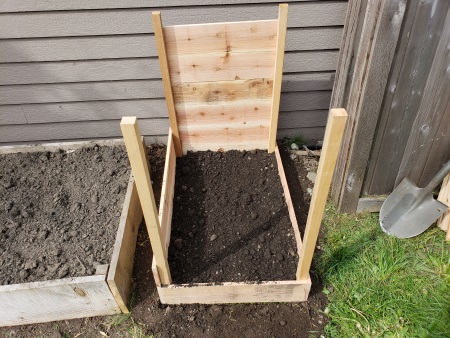 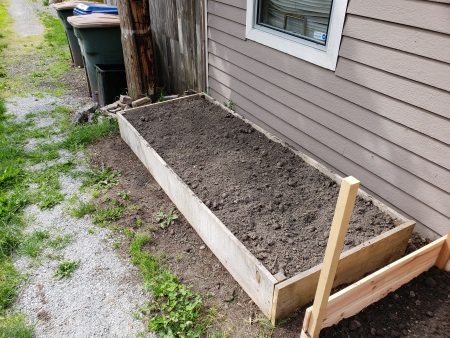 It was Little League day at Safeco field on Sunday for the Mariners vs. Tigers game. Cora and Harlan were pretty excited and they got into their uniform and we were off to the stadium. 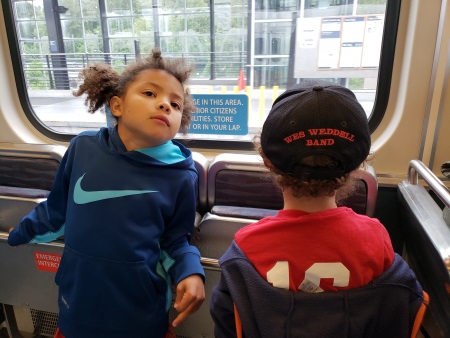 When we got to the field, we got the chance to walk on the field as part of the Little League parade, which was a lot of fun. 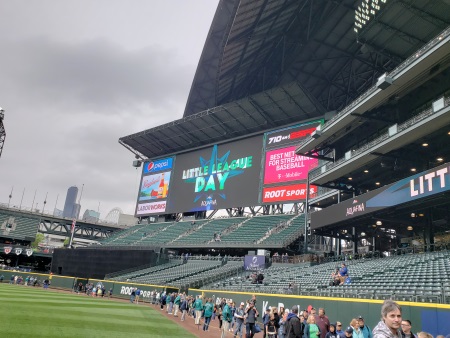 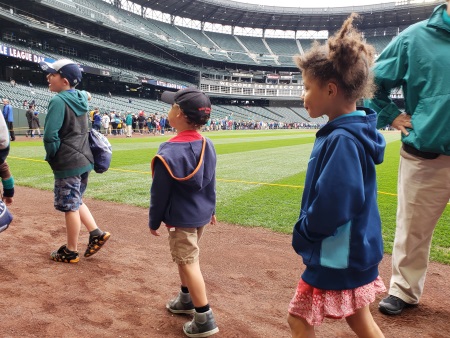 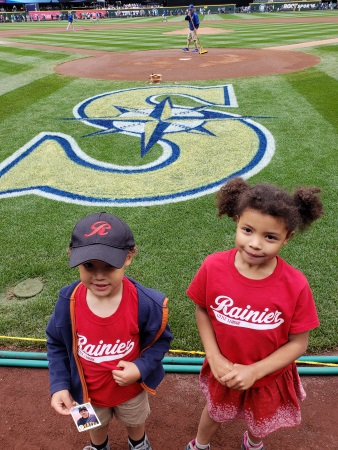 The day was a lot of fun. We all shared a bunch of grasshoppers (yes the bugs) and the Mariners walked it off in the 11th.

Cora, today had its ups and downs. But it ended on a real high note. You suggested we just ‘put a dinner together’ and proceeded to the cabinet and grabbed Goldfish crackers and nuts. I exclaimed, ‘No no no, you’ve had absolutely enough carbs and junk today, you need vegetables!’.

Mind you I had no idea what we would eat that would make everyone happy that would get enough veggies in. Lucky for all of us, Cora had just harvested some kale and chard, and I some tomatoes (and both kids had gotten the pumpkins!). Cora saw that and immediately thought to make a salad. She grabbed the santoku knife, and started in on the kale and tomatoes (she scared me with the tomatoes but did em safely anyway).

She asked about other veggies we might have (remembering what we had eaten the day before) and I rummaged in the fridge, pulling out cabbage and celery. That girl proceeded to whip up a mean salad that EVERYONE in the family enjoyed.

Here are the fall crops we recently harvested. 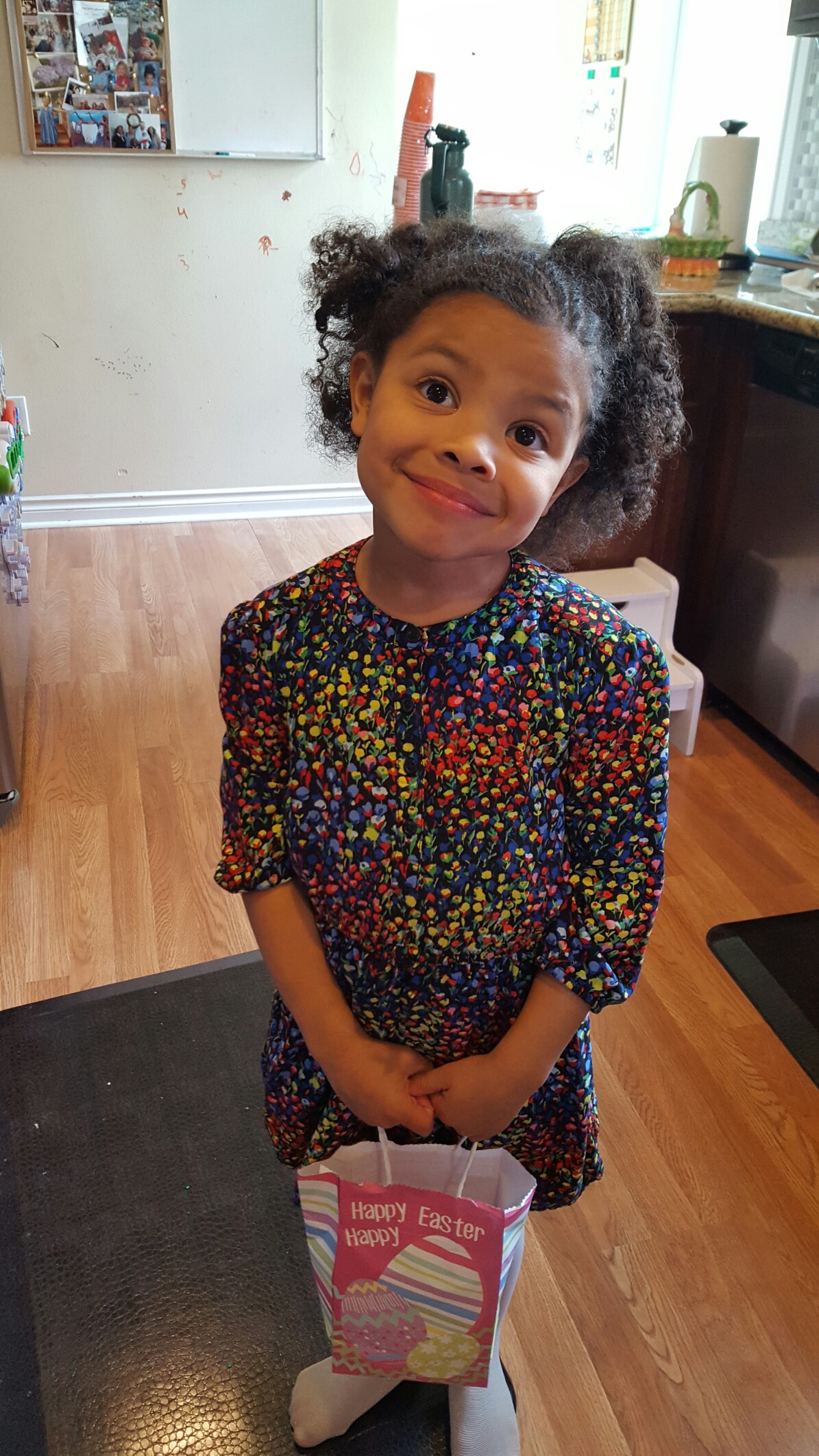 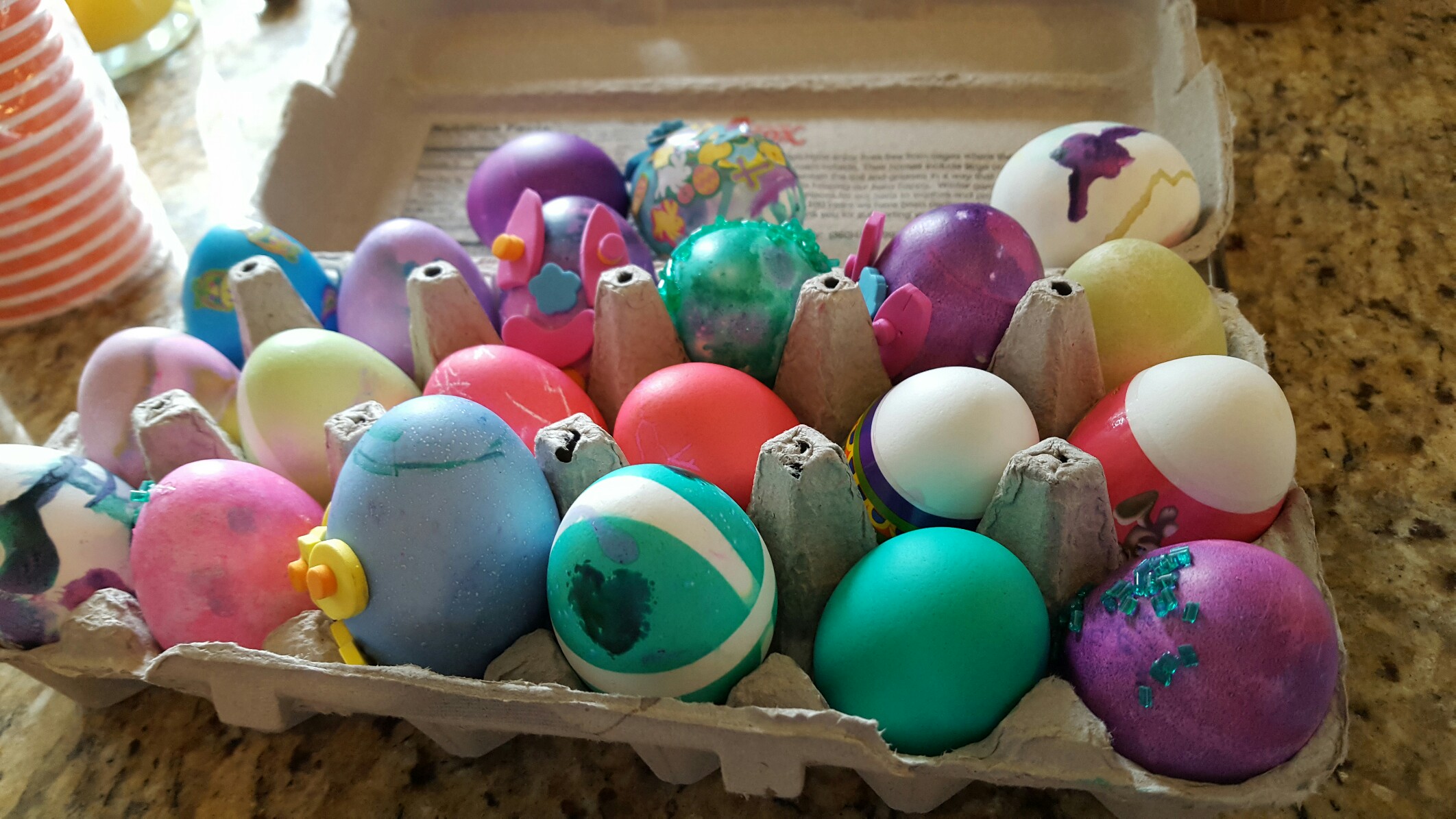 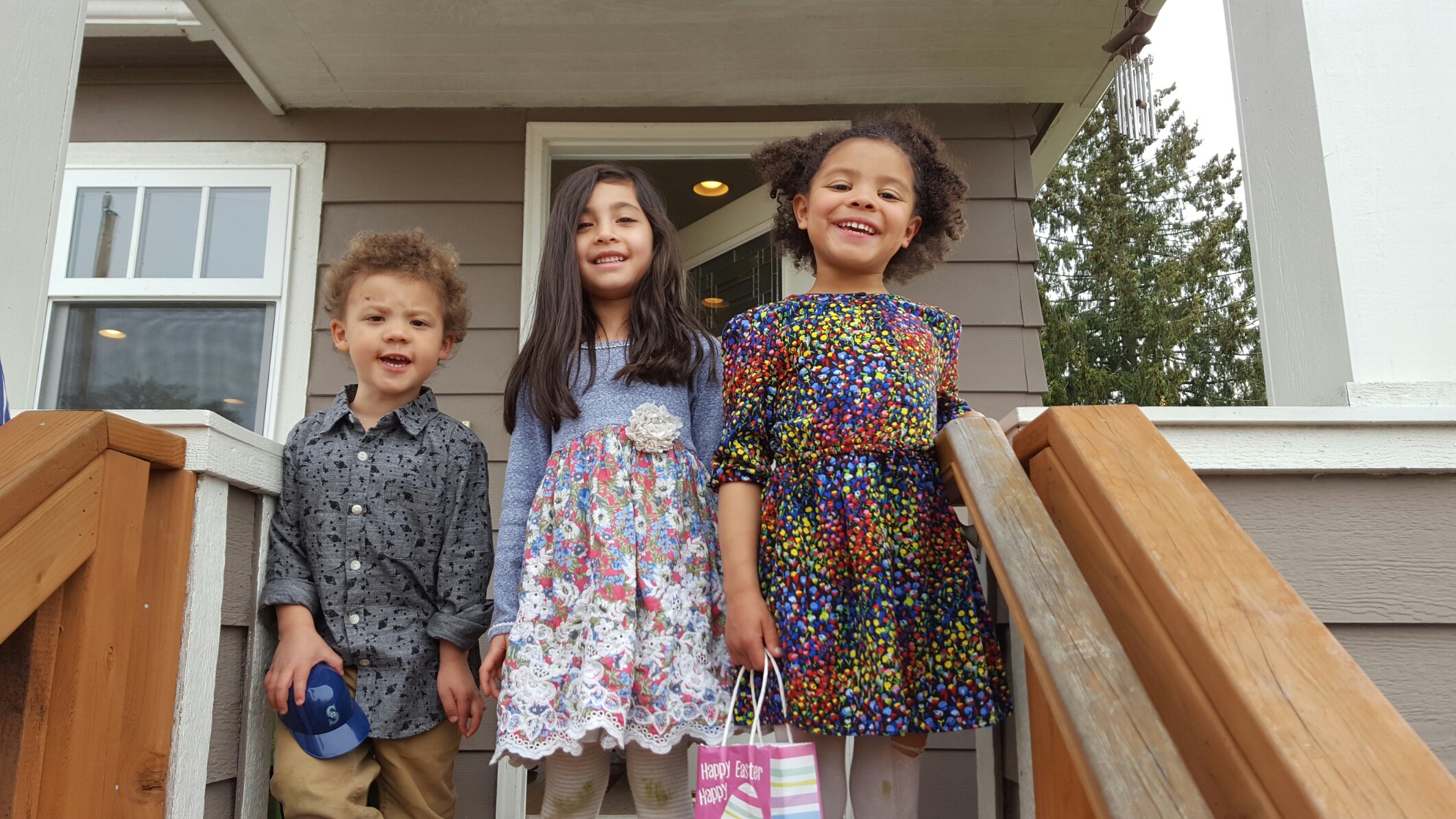 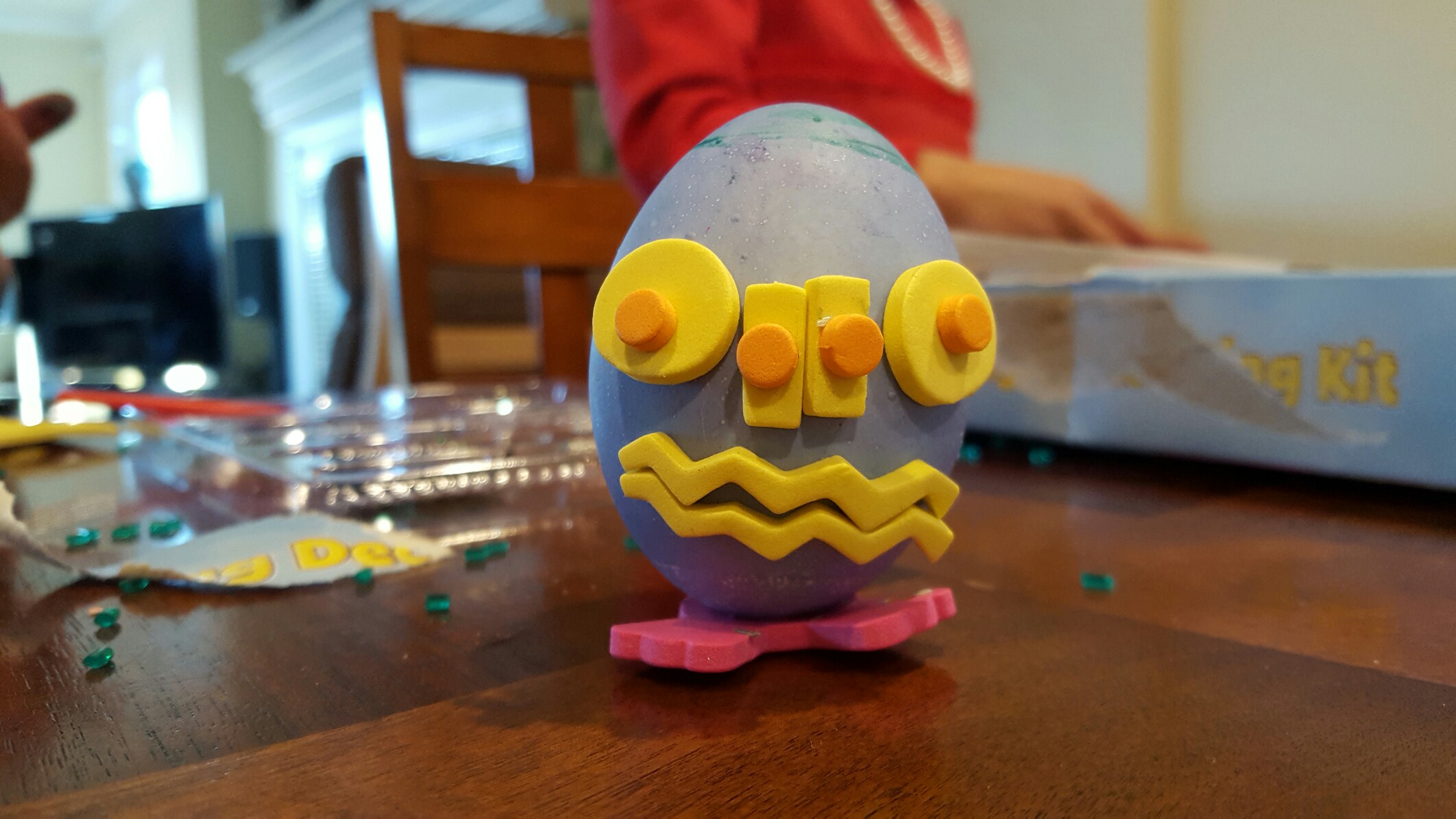 Happy Easter to all. Cora and Harlan got a Bible story from PawPaw so they could be reminded that Easter isn’t only about candy. Of course it was mostly about candy foot them all,  but our neighbors on Mead St made it also about community.

I didn’t get very many all inclusive pictures, but it was a beautiful day.

I don’t know what else to call this day. It was euphoric and tragic. There were giggles, smiles but also tears, damaged property and death.

The day started with schools closed and beautiful snowy environs. Sean dug his Rogue SUV from the snow and braved the streets at 5am to sit on an airplane for 6 hours to go to Dallas. I planned out a fun day around a few crucial meetings but otherwise intended to enjoy the day with the kids in the snow.

When the neighbors arrived, we suited up and headed out for snowpeople making, snowball fights and sledding. Apart from Cora thinking I left her alone and getting soaked because I forgot it was SNOWING, we had fun, no real drama. We got back and only minor sibling squabbles ensued. Cora even helped me clean the fish tank, practically on her own.*

After a few more meetings we set out again, this time by bus and train to retrieve Sean’s truck from the airport. Well that’s when it got real groovy. I realized when we got on the train I had forgotten the key to Sean’s car AND I had left my phone on the bus. Got off at the next eternally far away stop. By the time we got back to train stop to go home, I irrationally decided we needed food for lunches the next day, so we popped in to the Safeway at that stop. The bus took so long after we finished (+15 min is an eternity with 2 kids who are wet, cold, and hungry) that I had to take the kids inside the shop next to the stop to warm up. They, of course, acted like they lived there and took their shoes off. I saw the bus coming and, of course, freaked  and rushed to get them shod, only to forget the bag of groceries.

We finally make it home only to realize that in my rush earlier in the day to make one of my meetings, I had forgotten the grate on the fish tank filter and it had caught Castle, Harlan’s fish, like the scene in Finding Nemo but with an unhappy ending. Harlan, bless his heart, assumed Castle had just “moved to another tank”. Cora wasn’t quite fooled.

When I went to put Castle to rest in the backyard, the ridiculously heavy gate in our yard was stuck and when I pushed on it to get it open, it straight fell off its hinge, almost on me (it’s a 6’x 8′ x 6″ gate door). I decided I need to avoid any further brushes with the horrific and stopped trying to do anything useful. Except get this out.

Sean was a champ in the kitchen this year. 4 batches of sugar cookies, gingerbread, chocolates, candies and general merrymaking to get ready for the family to fill the house. Oh and to cause sugar highs in the kids prior to their arrival. But mostly for merrymaking. 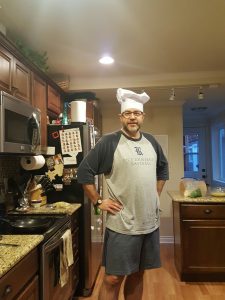 Making it happen in the kitchen

The results of our labors. The kids really enjoyed decorating the cookies themselves. I also got in to the piping bag decorating again as well. It’s been a while and it scratches that creative urge I don’t often get to fulfill these days. 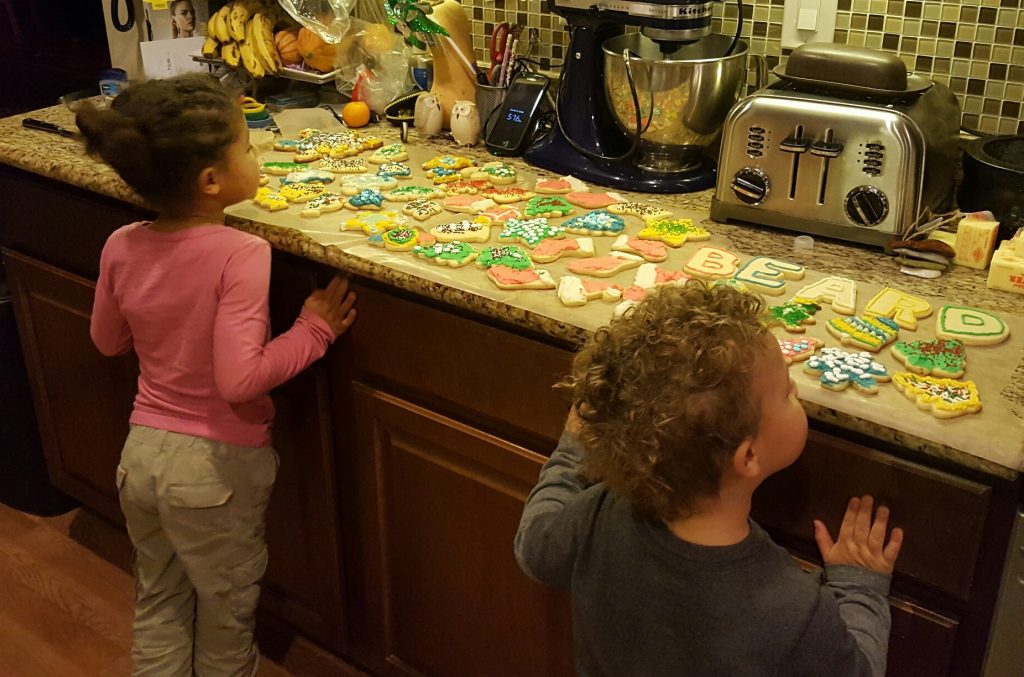 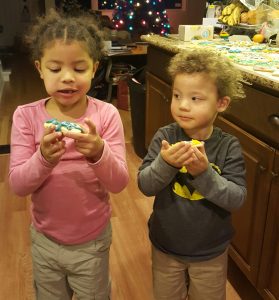 Okay but just one. 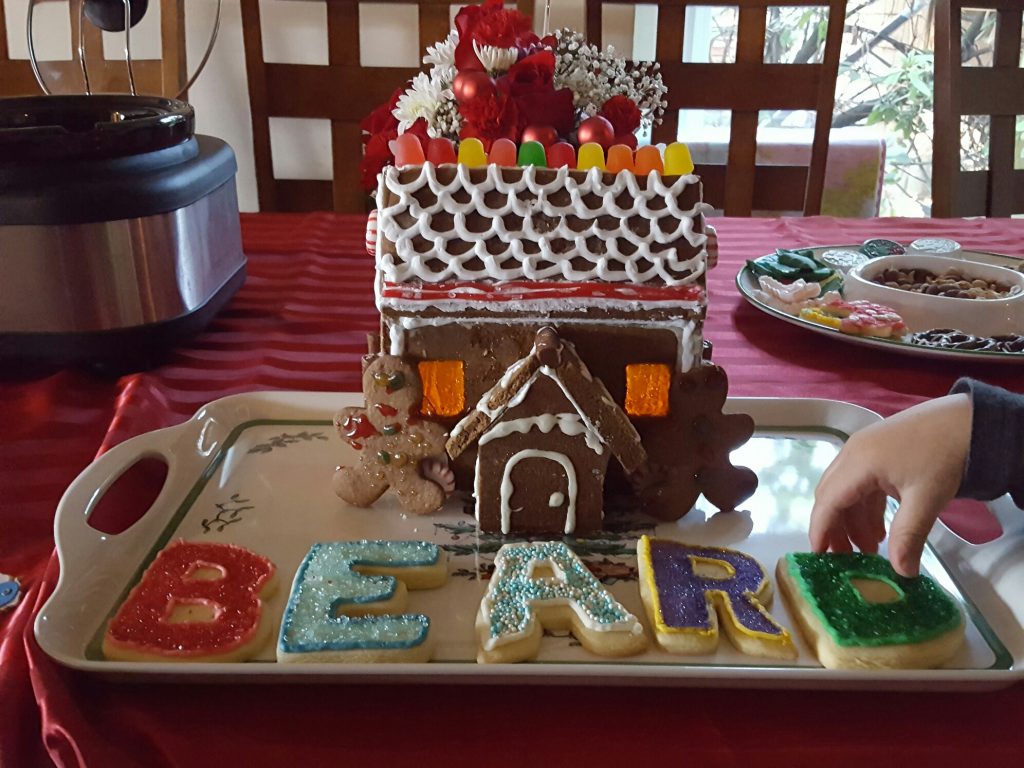 A family-made gingerbread house along with sugar cookies made for an almost irresistible centerpiece.  Hands off, buddy! We’re watching you… 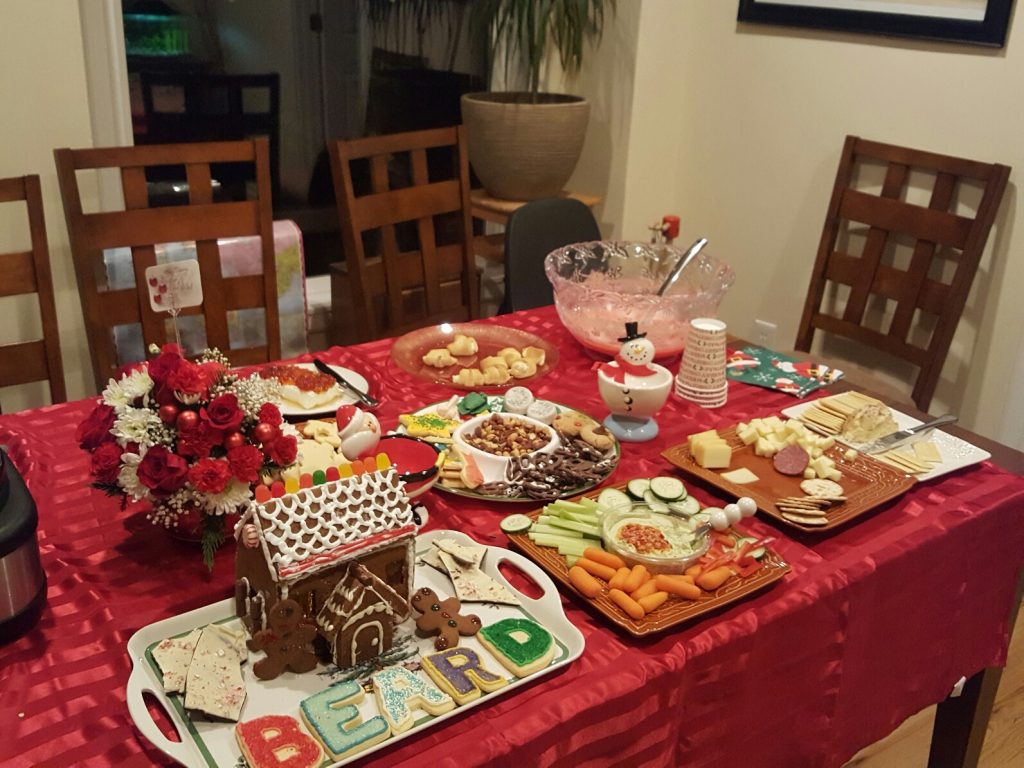 I meant to get a picture BEFORE the decimation by a hungry family. Good thing the veggie tray survived. 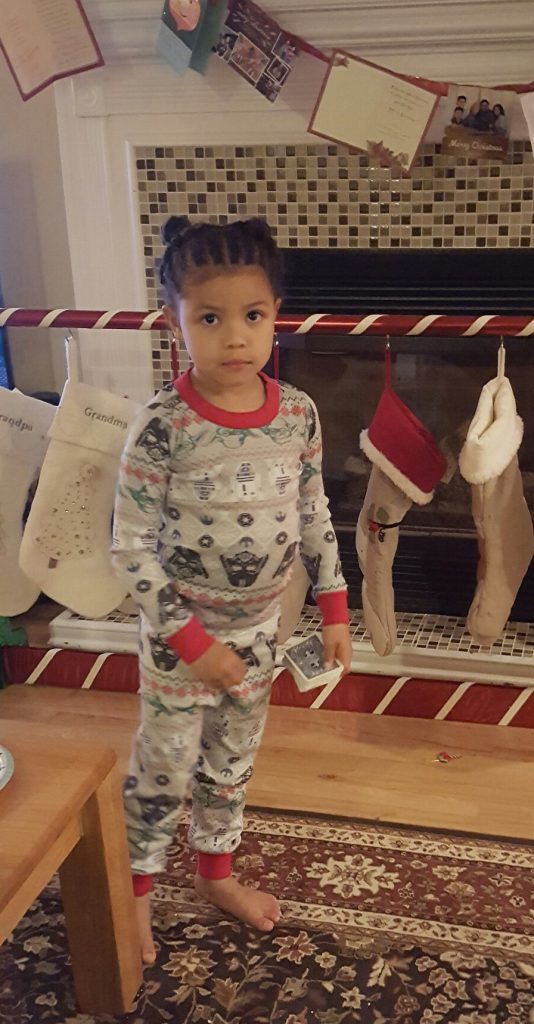 We have a family tradition on Christmas Eve to eat delicious food,  play games and visit with each other.  For a while, there was no one to worry about getting to bed on time,  and the timing went up util midnight where my sister and I would get to open one present then off to bed we went. Of course, Cora and Harlan needed to be sent to bed in order to ensure Santa would visit our home. Thankfully there was minimal resistance as they had enjoyed a full day of family and games. Cora won every hand. 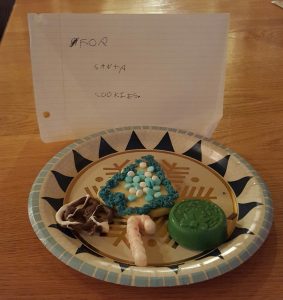 Cora penned the note for Santa to know the cookies were especially for him. 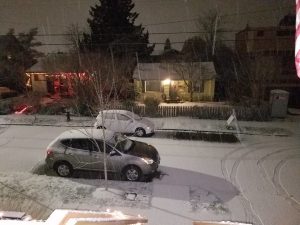 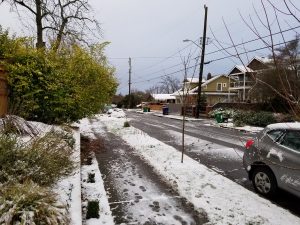 It doesn’t snow very often in Seattle, so it is kind of a special event when it happens. While an hour almost in any direction will take to you to snow in western Washington, there is something special about snow in my yard. 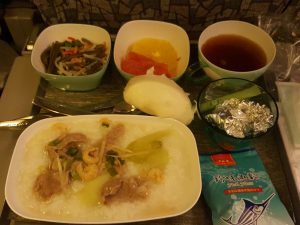 Why has no one told me about this little gem before? On my way to Bangkok on EVA Air, I chose the Chinese style breakfast,  pictured above.  Yam noodle and seaweed salad, rice bun and dried shrimp with pork and FISH FLOSS! It was a dried almost, powdery substance slightly sweet with a fish flavor of course. Added to the shrimp  and pork rice dish, was muy sabroso!

On this trip, no doubt there will be many posts about food, and I was lucky to start it off with something new before I even set foot in Asia :).

I’m missing the kids a lot already, and know they are having a great time with daddy!

Sean invited me to share his annual pilgrimage to Mirror Lake along the Pacific Crest Trail for his birthday this year.  I said yes, and we both took the day off work, dropped the kids at daycare,  and headed out I-90 through Snoqualmie Pass to the trailhead.

We packed fishing gear – a favorite pastime for Sean – the hammock for laying about – everyone’s favorite pastime – and lunch. It was a beautiful day and the trail was practically all ours. 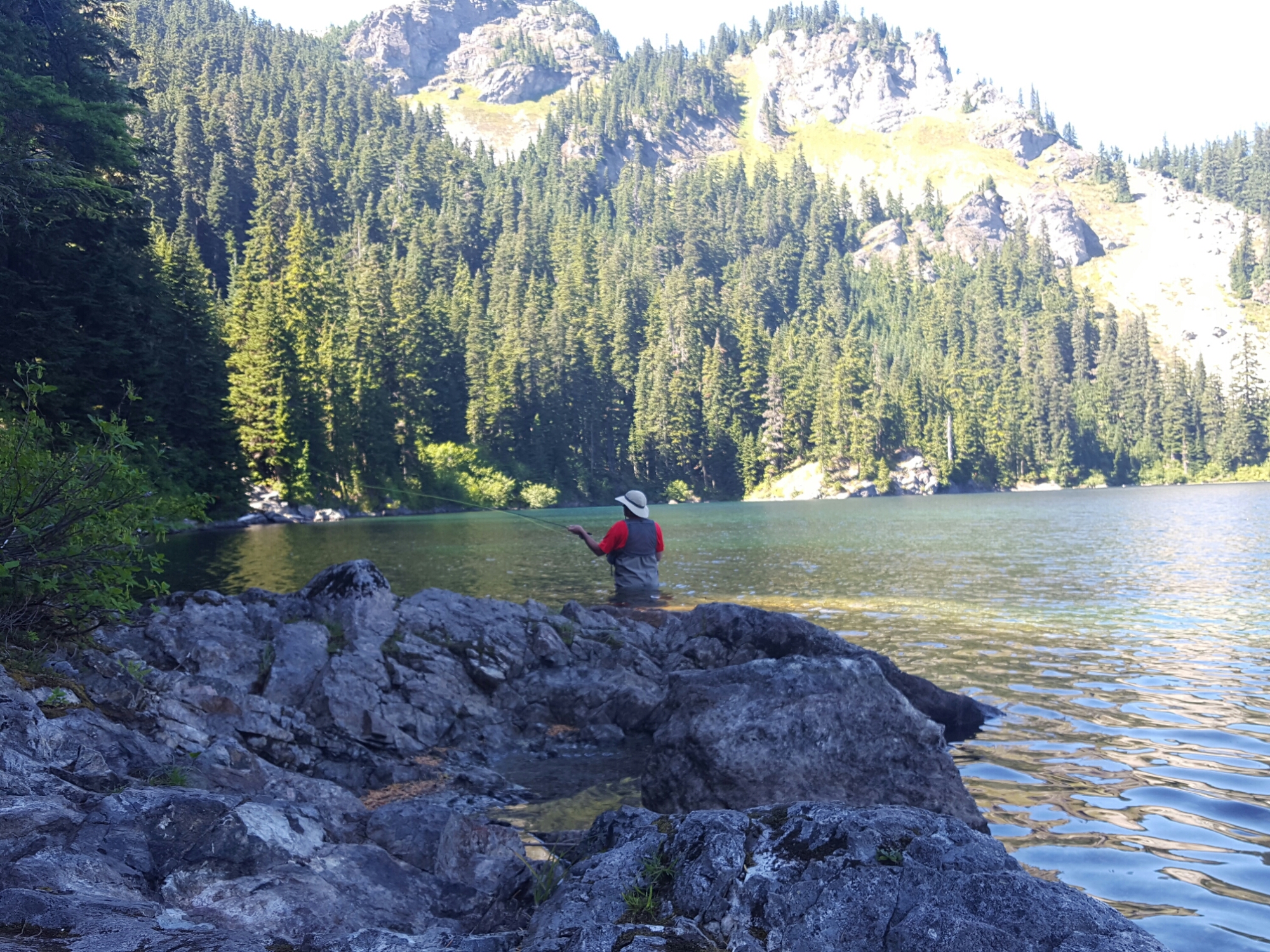 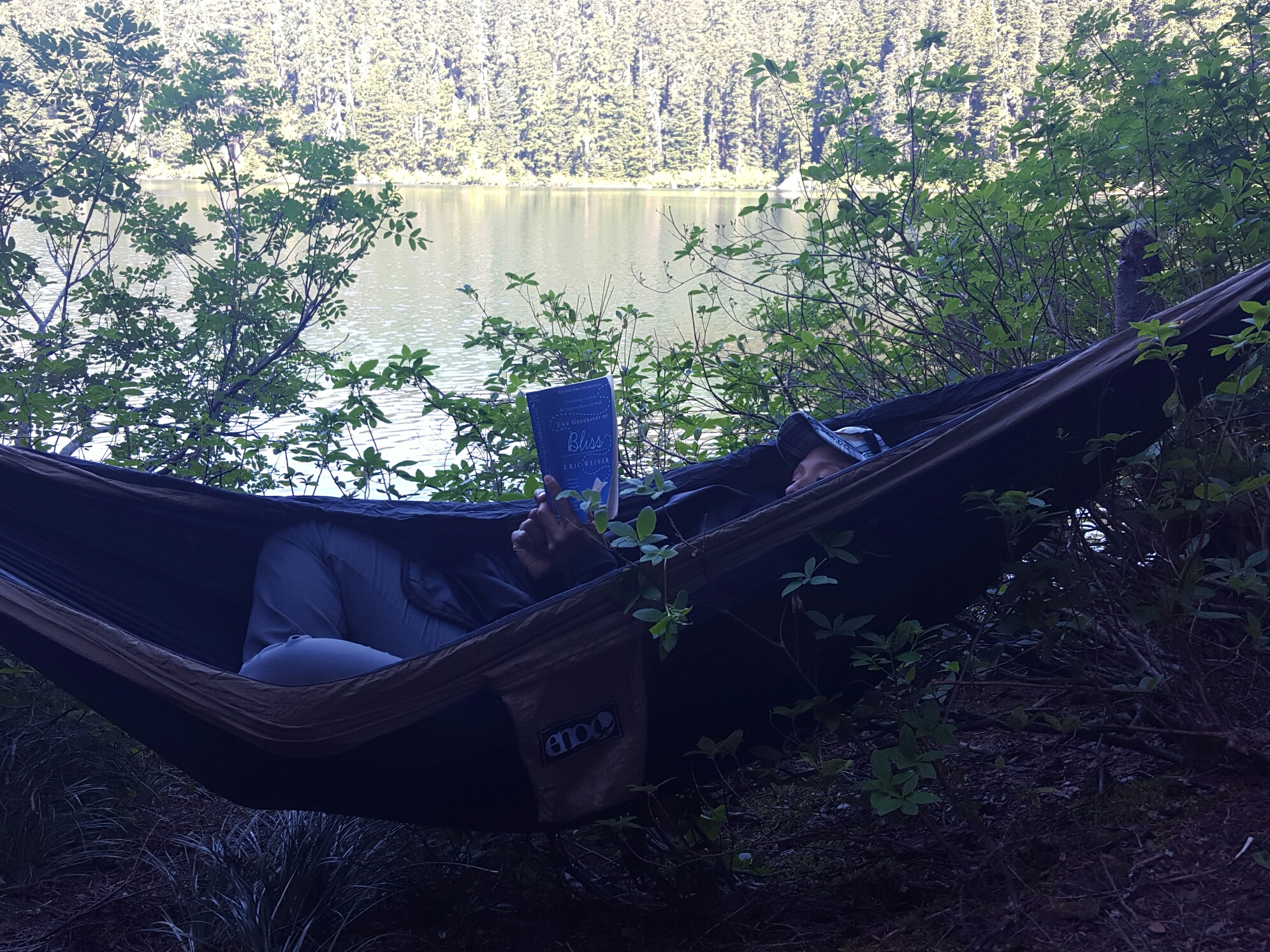 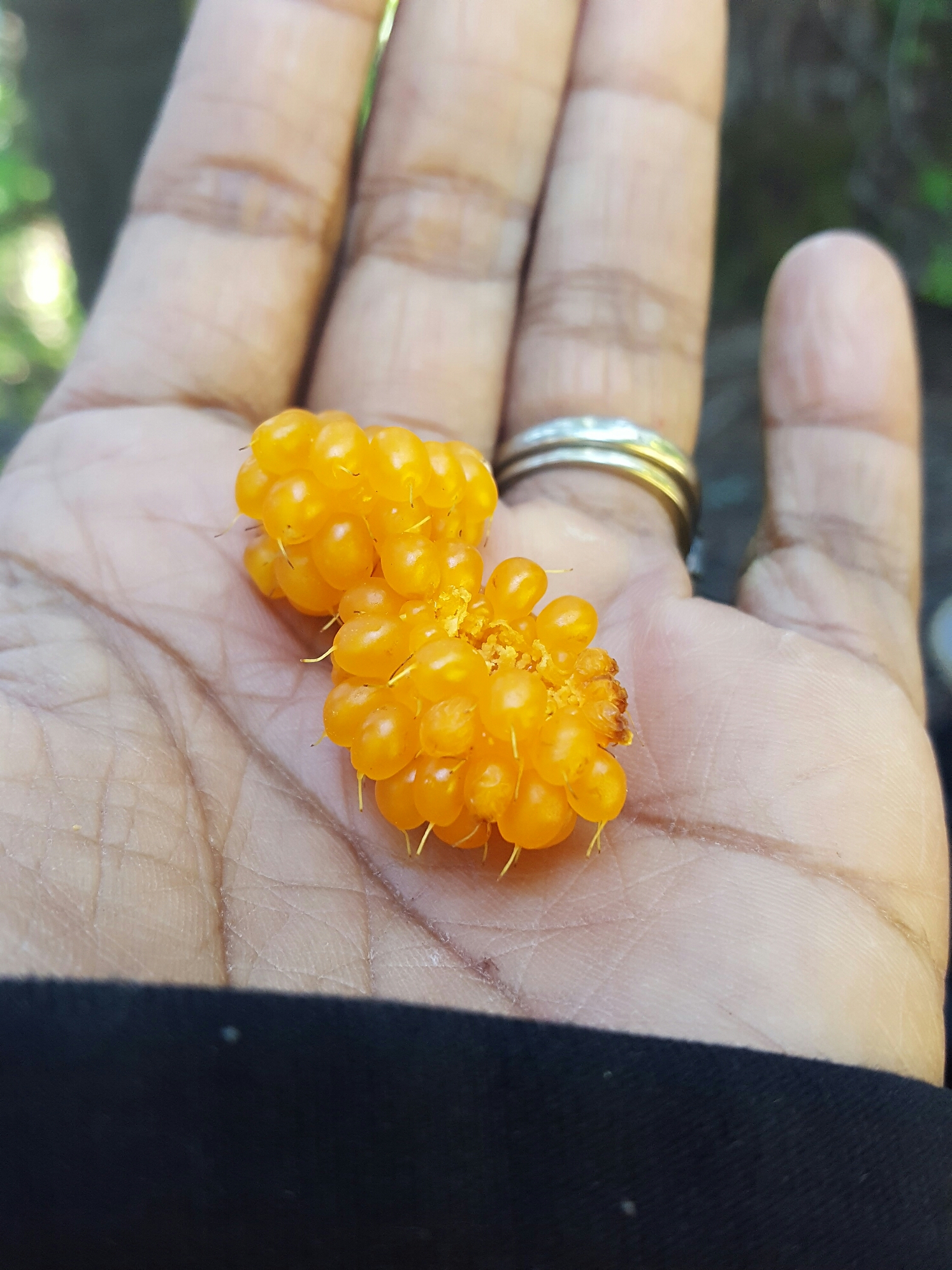 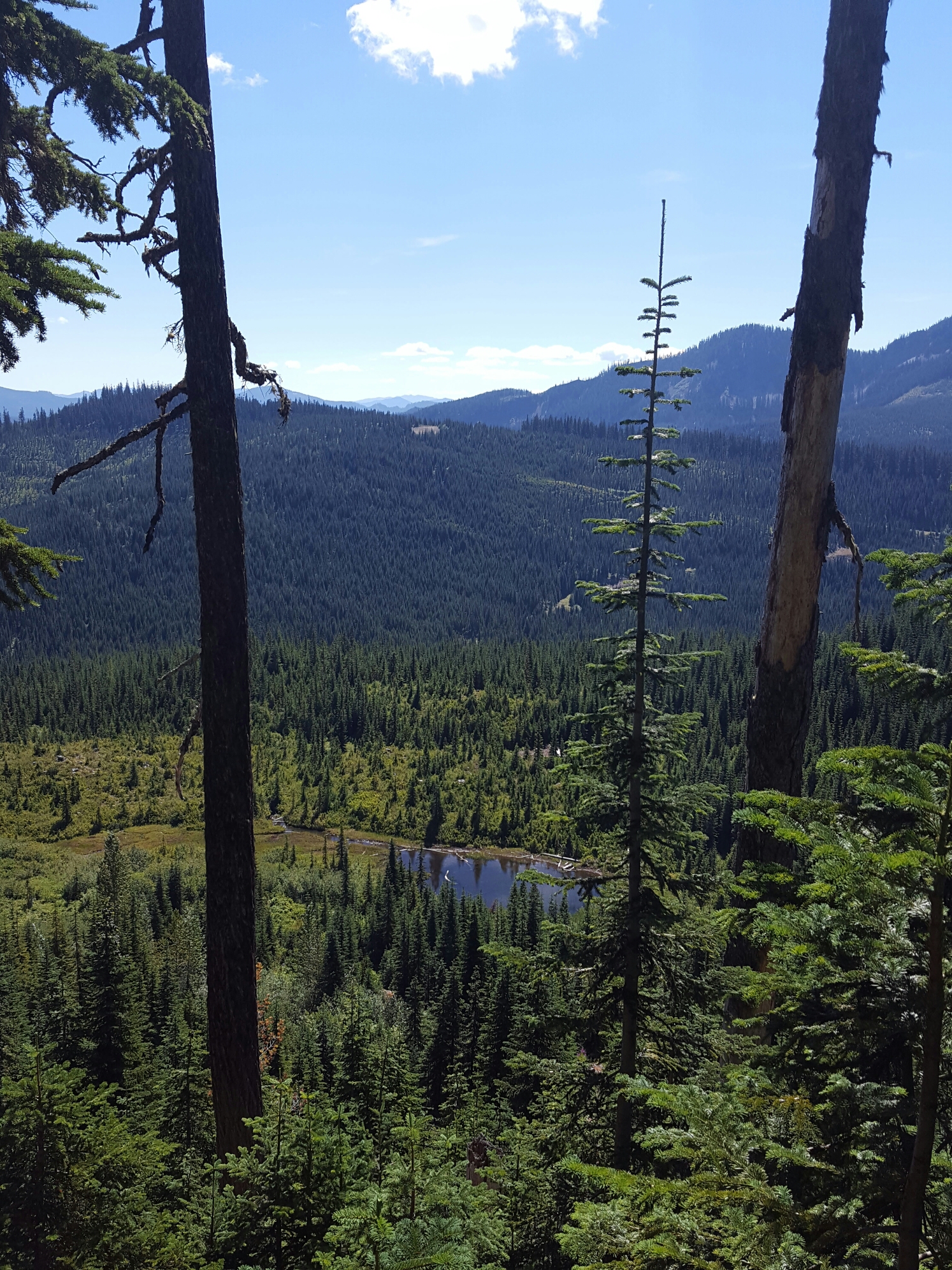 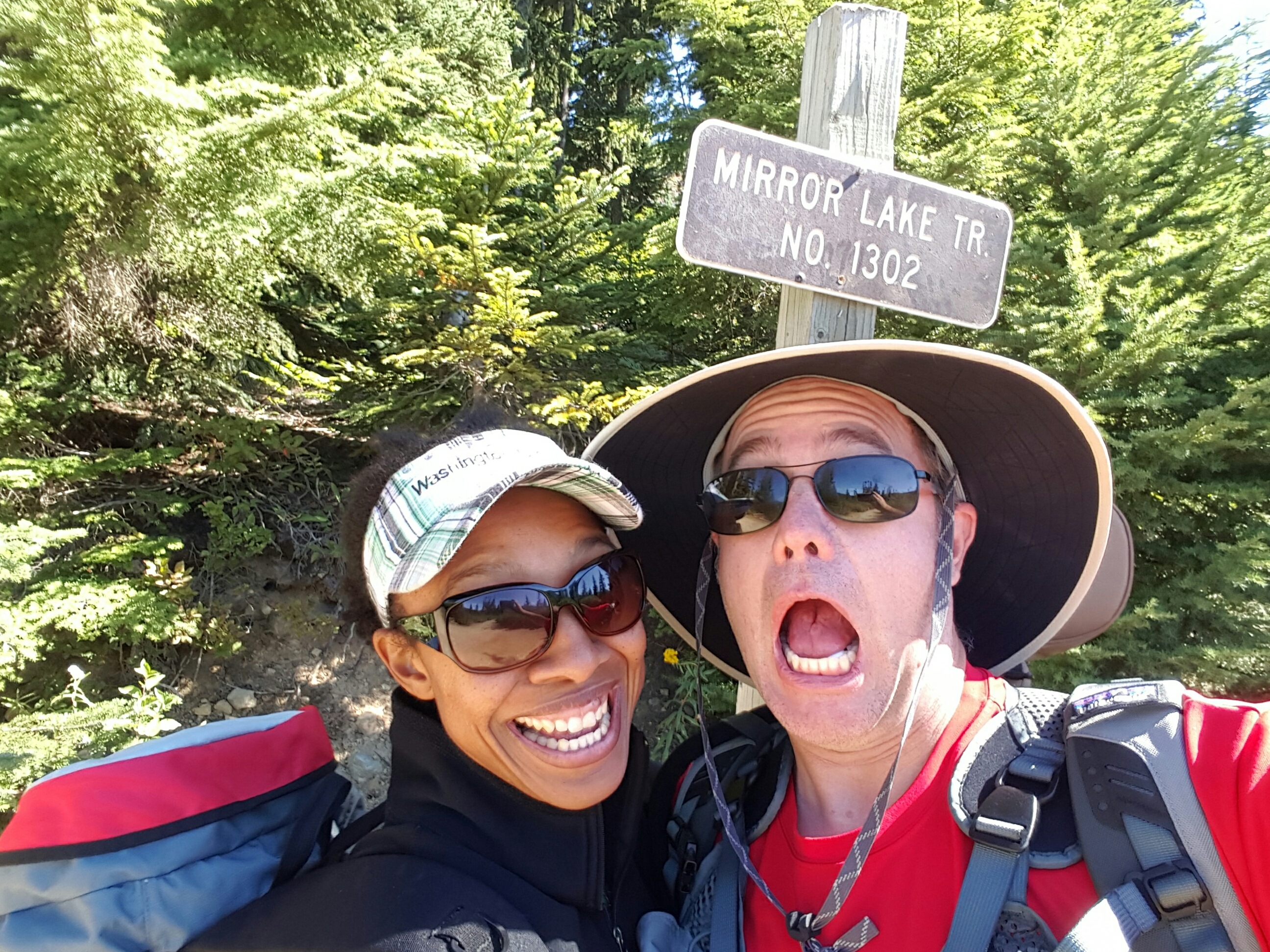 The last picture really sums up the day,  there were excitement and thrills had by both of us. Mine were mostly related to sleeping in the sun,  reading a funny book and hanging with my man,  but I’ll have to let Sean tell you about his thrills on his own terms.

This week we celebrated 5 years for Cora and Harlan. They were full of energy in anticipation for the annual bounce house insanity that we invite to our backyard. This year was special also in part because Cora will start Kindergarten in just under two weeks. We’re so lucky and grateful to have such healthy,  strong,  cheeky kids.

I know at some point they will want to have their own parties but I hope it isn’t for a long time.

Plus, how will  we keep people thinking they’re fraternal twins if they have separate parties?